Sports turf managers are, quite rightly, looking to reduce pesticide use on their surfaces and improving soil health is one way to do that.  There are many success stories from using organic and high-carbon products to reduce reliance on chemicals. Recently biochar has started to become popular and I have seen lots of the benefits discussed, but few of the potential issues of employing biochar in sportsturf soils have been raised.

Biochar does have definite benefits for soils and plants, such as increasing the soils CEC and moisture retention due to its honeycomb-type structure giving an extremely high surface area:volume ratio (much like zeolite).  This also gives an area for microbial life to colonise, so you will increase microbial life and diversity in your soils.

What the research says

The issue as I see it with regards to turf is down to the potential effect on the drainage of soils.  This research paper carried out a series of tests on adding biochar to sand-based rootzones and found that biochar reduced hydraulic conductivity (movement of drainage water through the profile) by up to 72%.  The problem is significantly worse when particle sizes finer than sand are used.  The research suggested that these fine particles block the soil pores and reduce the ability of excess water to drain successfully through the profile.

Biochar is not biodegradable.  It is virtually permanent once in the soil (it takes 100’s of years to break down).  Greenkeepers/Groundsman should be aware that once this product is in your rootzone, it is there permanently – there’s no shifting it.  Any reduction in drainage rate will need a lot remedial work to rectify.  A summary of the results in this research paper reads: “These experiments suggest that mixing sandy soils with biochar is likely to reduce infiltration rates, holding water near the surface longer.”  Doesn’t sound ideal in any type of sports turf does it?

Another research paper showed similar results for hydraulic conductivity and also had a 50% reduction in rooting depth in the biochar treated plots.  The conclusion was this may be down to an increase in moisture being held high up in the soil profile, meaning roots have found sufficient moisture near the surface and have no reason to put down deep roots.  This has an obvious issue in sports pitches where deep-rooted turf is needed to reduce divots and kicking out.

Biochar does have benefits for turfgrass, but the potential negative effect of wetter greens/pitches should be understood fully by greenkeepers and groundsmen before they commit to what is effectively a permanent soil amendment. 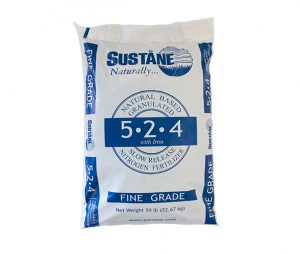 Many of the benefits of biochar of increased CEC, boosted microbial life in soils and increasing available nutrients and soil water can be achieved using high quality aerobically-composted organic fertilisers such as Sustane.  This research paper from the USGA conducts a test on Sustane 5-2-4 amongst others and the effect on hydraulic conductivity.  This showed no difference in hydraulic conductivity after Sustane 5-2-4 was applied.

Turf managers should be applauded for looking to organic alternatives, but understanding the effects of all products is important.  It is well worth considering all options for improving soil health before committing to a permanent product with potential long term negative effects.