Over the last decade, we have become increasingly aware of the potential problems to turf caused by high populations of plant parasitic nematodes (PPN). PPN are obligate parasites, feeding only on living plant tissues.

They have long been recognised as causing damage to warm-season grasses but research has now identified many different species that are frequently present in cool season turf. PPN populations will naturally rise and fall during the year and population growth is strongly affected by temperature.

They are able to migrate vertically or horizontally to avoid unfavourable conditions or to locate more productive feeding sites. PPN are aerobic organisms that require a film of water through which to move and their populations can rapidly build in high sand content rootzones.

PPN can be divided in to either endo-parasites that spend most of their life within plant tissues or ecto-parasites which remain in the rootzone whilst feeding on plant cell nutrients. They may also be migratory or sedentary in their feeding habit and most PPN that affect turfgrasses, do so by feeding on or within the roots.

There are a small number of PPN that colonise the stem base or leaf tissues but little is currently known about relative population damage.

PPN feed by inserting a hollow spear (stylet) in to the plant tissues, introducing compounds to maintain their feeding sites and removing the plant cell content. They can significantly and adversely affect the plants biochemical balance to sustain their parasitic behaviour.

The most damaging PPN are the so-called sedentary endo-parasites known as the Root-knot (Meloidogyne spp.), Cyst (Heterodera and Punctodera spp.) and Root Gall (Subanguina sp.) nematodes. The Root Gall nematode is largely restricted to infection of Poa species but all grasses are susceptible to infection by the other two. Induced changes in root structure and function directly affect plant growth and development, resulting in a weak sward that is likely to show symptoms of stress.

The lesion nematode (Pratylenchus spp.) is a migratory endoparasite that causes significant damage to root cortical tissues. There are a large number of migratory (and occasional sedentary) ecto-parasites that can feed on turfgrass roots and some can benefit from endo- and ecto-parasitic behaviour. Because most PPN affect water and nutrient uptake, visible turf symptoms often resemble drought or nutrient stress.

By maintaining a strong and healthy sward, the turf is more capable of tolerating the feeding activity of high PPN populations. Resent research has shown that reducing turf stress through biostimulant application, can reduced the damage done by these parasites.

There is presently one product available with approval to control PPNs but several soil amendments have been seen to suppress PPN populations. 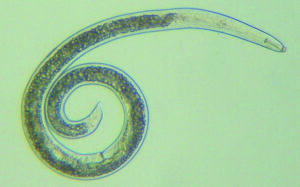